Eric Jackson is a huge name in the kayak world. He’s a four-time world champion and an Olympian. But maybe more impressively, he founded and until recently ran one of the leading kayak brands in North America, Jackson Kayak.

But he left Jackson late last year to focus on a new project. Now, that project has hit the airwaves in the form of Apex Watercraft TYR.

And Apex Watercraft is swinging for the fences with its first product. This fishing kayak is estimated to weigh in at just 40 pounds, as Apex Watercraft constructs it from carbon fiber. The design looks extremely practical for serious anglers.

Oh, and did we mention it crashes the party with an $8,000 price tag? This is what we know so far.

Before we get into the rundown on the Apex Watercraft, take a few minutes to watch the brand’s buzz reel, below. It provides a lot of background, and you get a look at this beautiful boat from many angles.

But if you have a chunk of change to devote to a fishing boat and like human-powered recreation, there’s not much that competes with it. Here are some of the differentiating factors compared with the rest of the market.

In the video, Jackson outlines the team that builds these boats. Jackson, a legendary kayaker; Bob Blair, an award-winning stand-up paddleboard (SUP) designer; and Russ Emanis, who ran the composites program at Lockheed Martin for the F-22 Raptor fighter jet, joined forces in the design and manufacture of the Apex Watercraft.

Apex uses carbon epoxy foam core for the primary construction of the boat. Light and strong, it’s similar in construction to high-end racing yachts. And due to carbon fiber’s excellent properties, it allows the boat to weigh in at about half the weight of similar boats made from more common roto-molded plastics. 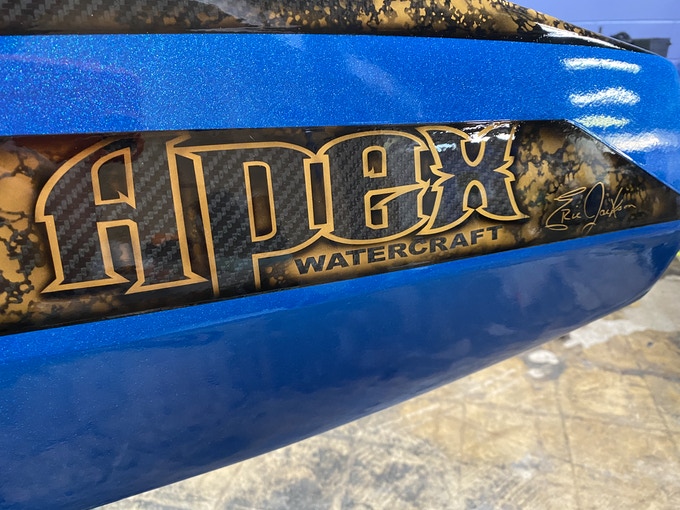 The hull melds the stability of a stand-up paddleboard with the size and paddling layout of a sit-on-top kayak. It allows anglers to easily switch between seated and standing positions, something anglers will really appreciate.

The hull has many other smart design elements. It has a lifting bow, which pierces the water for low drag while letting waves simply crash off the sides without bringing water into the boat. That bow, coupled with an open transom, allows water to run right out of the boat without collecting on the deck. This eliminated the need for scupper holes found in most sit-on-top kayaks, which reduces drag.

Overall, the Apex’s speed and stiffness should allow anglers to get to the fish faster than a typical kayak fishing craft.

The boat doesn’t stop innovating in the hull. The carbon-fiber seat reduces weight. It also swivels with the user, allowing them to cast in various directions without turning the hull.

Plus, the low-profile design allows you to hang your feet over the side — who doesn’t love that?

These are the specs for the TYR as provided by Apex Watercraft.

If you’re drooling, well, you aren’t alone. The Apex Watercraft TYR is one of the coolest new boats we’ve seen in a very long time.

But obviously this one is a big investment. Handmade carbon fiber boats are not on everyone’s must-buy list. But if you take your fishing very seriously, it’s definitely one to investigate.

For those digging in further, the boat launched today on Kickstarter. There, you can support the project, starting with $45 for a made-in-the-USA t-shirt by Marc Nelson Denim. There are several other interesting products from the brand, like a carbon fiber paddle and artwork. Buying these supports the launch, but at a lot lower entry point than an $8,000 kayak.

But for the serious anglers willing to jump in on a new boat, the Apex Watercraft TYR is available to order now. With an estimated delivery of August 2020 and only five available, you can pretty much guarantee you’ll be the only one of these on your local water.

How to Get In and Out of a Kayak with Bad Knees, Hips or Other Body Aches

Health benefits of outdoor exercise including the beach.

Fishing in An Inflatable Kayak: Tips and Tricks